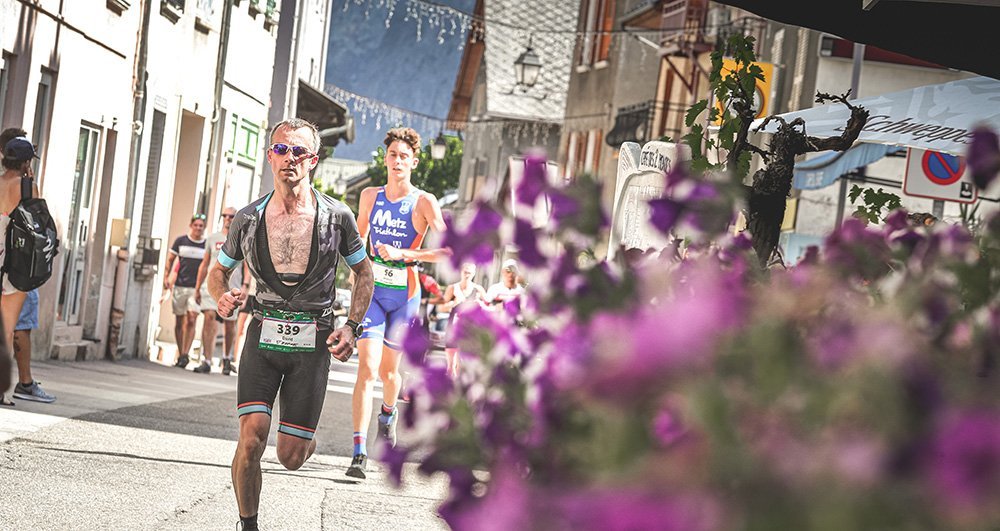 The Alpe d’Huez Duathlon 2021 is entering its final straight: on Monday 25 January, only 50 race numbers are still available before reaching the limit of 600 competitors. The 2021 edition will therefore take place on Tuesday 27th July with a participation record at stake! A tradition for this event, which has become more and more popular since its creation in 2009. As a preamble, here are three reasons to take an interest in the hottest event of the summer.

New running circuit at the summit

It should have been implemented in 2020. Due to the cancellation of the 15th edition, the new course of the Duathlon’s second run, which was laid out in Alpe d’Huez, will only be inaugurated this year. But why did it go from 2.5km to 5.5km? First of all, extending the loop will allow the runners to express themselves and make the difference in the last discipline. Secondly, it offers a nice circuit using a good part of the one used by the Triathlon, with a passage through the grandiose scenery of the Col de Sarenne… it would be a pity to miss it! Thirdly, it makes the race harder because of its duration, while eliminating the agonic sprint (of questionable interest) which has been a feature of the event up to now.

Register to the Alpe d'Huez Duathlon 2021

The Duathlon-Triathlon double? A bet for enthusiasts!

Indeed, the Alpe d’Huez Duathlon 2021 allows you to take full advantage of a stay in the summit of the 21 bends. For the 15th edition, many triathletes have opted for a legendary double or even triple ration! To be precise, 31 participants opted for the Duathlon + Triathlon L combo, 117 for a duo Duathlon + Triathlon M and finally… 12 ambitious ones chose to attempt the triple! The Duathlon also remains a magnificent opportunity for those looking for a first experience in the 21 bends. If you have any doubts, ask Mr Victor del Corral, winner of the Duathlon before winning the Triathlon L twice in a row!

22% increase and 38% of foreigners for a Duathlon sprint

With the counter blocked at 600 participants for 2021, the Duathlon will increase the number of athletes at the start by 22% compared to the 2019 edition. For a sprint distance duathlon (more or less), such a participative success shows the original appeal of the race, a real rollercoaster of sensations and difficulties (including a first pedestrian part that is as charming as it is fast in the foothills and streets of Bourg d’Oisans). Note the massive arrival of the foreign delegations led by the Belgians, the Spanish and the English (25 nations represented in total). In summary, the Duathlon de l’Alpe d’Huez Duathlon is once again establishing itself as the best possible launch event for the festival. Don’t hesitate any longer.