Zone3, official swimming partner of the Alpe d’Huez Triathlon, offers you the testimony and advices of Tim Don, winner of the 2011 Triathlon M.

The Alpe d’Huez Triathlon is renowned as being one of the most scenically stunning triathlons available, with its mountainous paths, steep climbs and an altitude that tests even the strongest of athletes. This triathlon features a challenging 21-hairpin ascent, made famous by the Tour de France. The triathlons short and long-distance options are the perfect challenge for anyone wanting to really push themselves. (cover photo Credit : Robert Rathbone/220 Triathlon)

With a swim in Verney Lake, a bike ride through the famous Alpe d’Huez ascent and a 2000m above sea level run, this triathlon is one for the bucket list.

“What a classic race the Alpe d’Huez Triathlon is!” – Tim Don

“I raced in 2011 as a preparation for the WCS Hyde Park Race which was to follow 10 days later. I raced the shorter distance event and it was as epic as you can imagine. The Alpe d’Huez Triathlon is renowned as being one of the most scenic triathlons, with beautifully mountainous routes. Situated in the heart of the Alps and in the Oisans Valley, this race is really like no other. 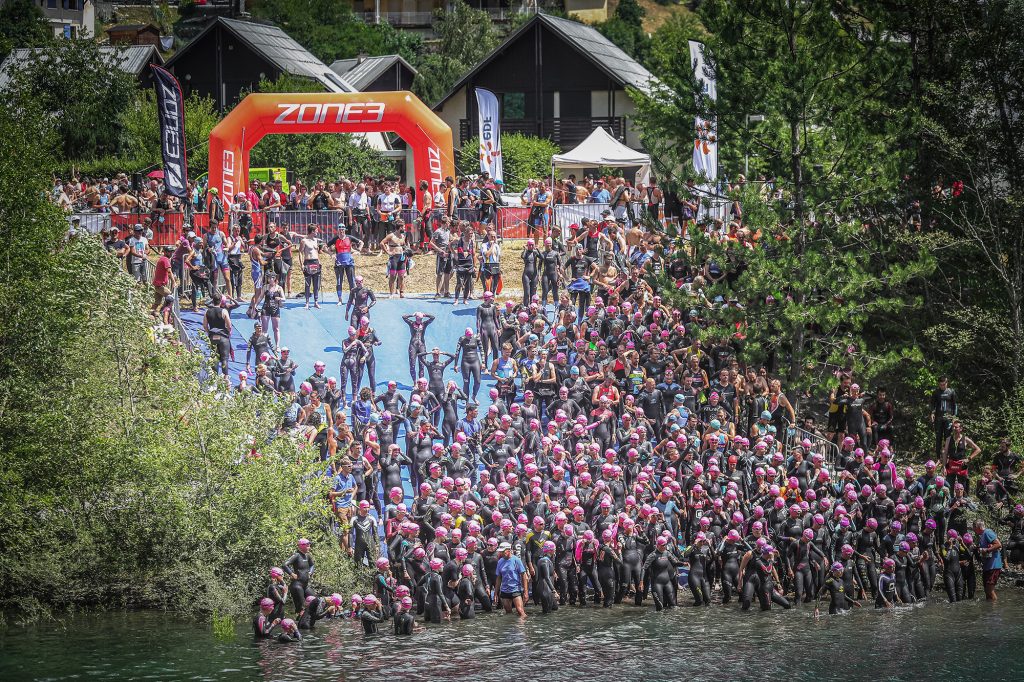 The 1.2km lap short-distance swim is in a bright blue lake fed by a glacier and proved to be bonkers cold. I recommend the use of an extra swimcap, although the average water temperature in the lake is 17°C. I would recommend preparing yourself with a land-based warm-up rather than a wet warm-up, as you won’t want to be getting cold unnecessarily before your race. I came out of the water in a comfortable 4th position, only around 20 seconds after Cesc Godoy (ESP) and Andreas and Florian Salvisberg (SUI). The Alpe d’Huez Triathlon, held in the hottest part of the summer, is known for having sunny circuits with just a few shaded parts, so it was easy to warm up after the chilly swim.

The cycle route of the Alpe d’Huez course echoes the route in the Tour de France, and with its 21 switchbacks, hairpin turns and Dutch corner, pacing is absolute key. The first 15km of the cycle leg, after a very brief climb from T1, is often thought to be quite simple. The section of the course is flat and designed for speed allowing for some very close racing, before the road kicks upwards, with the first 3 switchbacks being the steepest. The lightest or strongest bike rider are likely to find their biggest time gains here. I began to close in on the lead and set the pace with 20 hairpins to go.

By the time you hit T2, you’ll be 1800m above sea level, and the air is crazy thin. The 7km lap was, admittedly, so hard but it was a great burn, especially on the second lap. The atmosphere of this race is electric. It definitely needs to be put on your bucket list if you want a challenge for 2020!”